From Shimano’s 1981 catalogue:
The pitch revolution that has changed the world of racing ….. 10mm. Pitch Series.
Shimano's new Dura-Ace 10 Track System is the new standard among competitive bicycle components.
Dura-Ace 10 is the first major deviation from a standard that has existed in the bicycle industry since mass-production of bikes began some 100 years ago.
It was so simple: Shimano reduced the distance between the sprocket teeth from the old 1/2” to the new 10mm. dimension.
Ten millimeter pitch allows the front chainwheel and the rear sprockets to be made smaller and the chain shorter. The smaller size means less weight and more rigidity and when rotating parts are lightened acceleration is increased.
Now competitors on Dura-Ace 10 can jump out of corners more quickly and get the lead in the sprint.
Dura-Ace 1 0 track components are already the choice of the best racers in the world. John Nicholson, twice world professional sprint champion, rode to his titles on Dura-Ace 10. More and more racers are changing to the obvious advantages of using the lightest components in track racing - Dura-Ace 10.

When I bought my Superia track frame kit, I all of a sudden became the owner of a super rare Shimano Dura Ace 10 mm pitch components group. Yes, I know that the chain set was assembled and that there was even a Dura Ace headset installed. But when I was asked if I was also interested in having the rear sprocket, I got the whole wheel set. So, besides the frame and fork, I had the chain set, bottom bracket set, headset, sprocket and front and rear hub! My original intention was to sell the chain set, but when I realized, that I had nearly the full group set, I decided to keep it, because I would never get this opportunity again. All that was missing, was a matching 10 mm pitch chain. It seems that the chain is the most sought-after part, but since I got the rest of the parts so easily, it was worth trying to make the set complete. I do not worry that much about the missing chain pinch or chain whip. Working on a 10 mm pitch chain must also be possible with standard (modified?) chain tools or home-made tools.

What is so special about 10 mm pitch parts?
Well, all bike (drive) parts in the world are designed around a 1/2 inch (12.7 mm) pitch chain. That is the centre to centre distance of the chain pins. A very long time ago, chain pitch was 1", but that was a different chain design. Somewhere in the 1970s, Shimano people got the great idea to reduce the chain pitch to 10 mm. The chain rings and the sprockets became smaller and the chain shorter, resulting in less weight. As always, you may ask what Shimano's real idea was: to design and make better components or to make something different, unique and incompatible?
Dura Ace 10 mm pitch series were introduced in 1976.
Somehow, the 10 mm pitch series never convinced the cycling world and the parts weren't a big success, despite the world championship match sprint (1976) of John Nicholson from Australia with these components. There is a story, that the Keirin federation banned these parts, because the riders would have an unfair advantage. But that could also be just a nice bla bla story. Somewhere in the 1980, the 10 mm pitch series were discontinued.
Not only the chain is unique. Of course, chain rings and sprockets have to match the smaller pitch and are different, too. And because the chain rings and sprockets have a smaller pitch, but the same number of teeth as regular components, the diameter is smaller. That makes it necessary to make the bolt circle diameter of the cranks smaller, as well as the diameter of the threads on the rear hub.
Head set and bottom bracket set are the same as the normal 1/2" pitch Dura Ace track series. 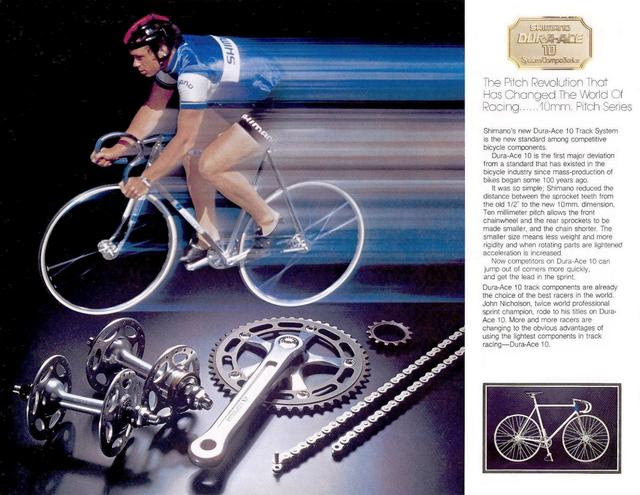 I'm selling what has been the frame set of my dreams since decades.
Unfortunately, it's a bit too small for me, otherwise I would have renovated it myself and assembled it with Campagnolo Nuovo Record.
This Colnago sub-brand was used by the famous Jan van Erp tegels amateur squad in 1980.
This frame and fork are covered with scratches, paint chips and corroded edges and spots, because it has been used, raced, stored for about 30 years. But it's technically okay and safe. No dents, dings or cracks.
Underneath the worn but original paint, chrome and decals is a beautiful Saronni/Colnago with lots of unique logos and engraved details.
According to the old Colnago catalogue, this Saronni frame has been built with Columbus SL tubing. That corresponds with the seat post diameter: 27.2 mm.
Restore this unique frame kit or leave it original as it is, whatever you think is the best. But please do it justice!
A must have for every fan of Colnago, Saronni and steel vintage bikes.

Go to this Flickr set to see more pictures

This is my new Superia track frame kit. Actually it's a bit more than just a frame and fork, because it came with headset, bottom bracket and chain set and a pair of wheels, too!
The frame is, very Superia-like, built with Ishiwata 022 tubing and measures 59 cm centre to top.
Based on the colour of the frame, the decals and the components used (Dura Ace 10 mm Pitch series!) I think that this bike comes from the late 1970s. It may have been the frame of an ex pro rider, possibly riding for the 1978 or 1979 team of Marc Zeepcentrale. In those days, the Marc team was equipped with Superia bikes and hires several track specific riders and some road racers, who rode on the track as well.
Some names: Patrick Sercu, Gary Wiggins, Ferdi van den Haute, Herman van Springel.
Unfortunately, there is no frame number or initials on the frame, that may lead to the correct date or name of the rider.
Judging by the frame details, it's built quite well and it's not cheap or mass manufactured stuff. The frame is not finished like an Italian piece of art, but at least the frame builder made some effort. Lugs and tips of the blades and stays are a bit rough, but still in a nice style.
I assume that everything is still original, but that also means that there are the usual wear marks and rust. Usually, I prefer to keeps things as they are, but sometimes it may be nice to restore. So, I'm not sure yet what will happen with this Superia. In case it will be restored, it will be repainted in the original light blue Superia colour and it will be done with wet paint, not powder coated. On top of that, I have to make replicas of the original decals. That will be a challenge, because I don't think that original decals still exist and replicas are also still not available. So, right now I'm busy with collecting additional information about the Superia company as well as the products. That may lead me to some additional materials to create logos, letters, artwork, decals.